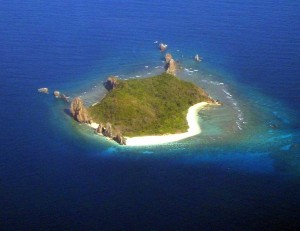 Dumanpalit Island as it is known to the locals, is the northward most island in the Palawan Region of the Philippines.  Referred to as Turtle Island because of it’s unique shape, this gorgeous island literally looks like a giant green sea turtle swimming through the turquoise blue ocean.  The closest other island or land mass to Turtle Island is approximately 15 miles away, a small island with an active resort.  This is not one of those islands that you can throw a rock from and hit another land mass.  This is truly a remote piece of land out in the middle of the ocean.

To get to Turtle, one would fly first into Manila, the capital of the Philippines.  From there, you would take a 45 minute flight to Busuanga, the closest large land mass to Turtle Island.  About 10 minute before arriving to Busuanga on your flight, you will find yourself flying directly over Turtle Island.  And the sight from the air will defy your imagination.  It is absolutely one of the most beautiful sites you will see.  Having said that, we do realize that we are probably very biased.  But there are very few places on the planet where you can stand at an elevation of 300+ feet above sea level and do a complete 360 degree rotation and see nothing but huge wide open ocean.

To the east and the north, no other land is visible even on the clearest day.  To the south, you can see land in the distance approximately 20 miles away, which is the same direction from which you would arrive at the island from Busuanga and is also the direction were the closest other island is located to Turtle Island.  And to the west, the closest land mass is at least 15 miles away, 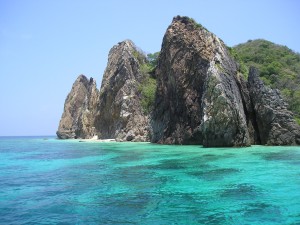 visible only if you are standing at the top of Turtle Island or on the west side of this tropical paradise.  The island is located in a portion of the South China Sea known as the Mindoro Strait which connects the South China Sea to the Sulu Sea.  This unique property is located in the last frontier of the Philippines in the region known as Palawan, a timeless land of beauty and wonder.

Supply barges come within a mile of the island once a week and could easily drop construction supplies and materials once the island has the construction process begun.  Our plan was to develop a medical and health retreat but due to some constraints on our parts, that vision did not materialize.  However, the potential remains to do exactly that, or any number of different projects could easily be developed.  Everything from a high end private owners enclave or retreat to an exclusive boutique resort to a scuba and dive haven catering to those who like discriminating tastes.

The possibilities are truly endless and the only restriction would be based on the number of people that could stay on the island based on the environmental restrictions as defined by the Department of Natural Resources (DNR).  An informal request in 2006 confirmed that the island could easily sustain 140 up to possibly 200 people at any given time.  However, that number far exceeded what we ever anticipated and we believe, the beauty of the island itself along with the uniqueness may be potentially dampened by having more than 100 people staying on the island at any given time.  In fact, the less people, the more magical the island seems.

Regardless, the capacity is there but the determination would have to be made after one stayed on the island and experienced the truly unique and timeless nature of the experience, before determining what they would want to do with the island.  We developed some detailed initial plans at considerable expense using one of the top 100 Architectural firms in the world as independently ranked by a number of independent architectural trade journals.  Those plans are also included with the sale of the island as are a number of other assets specific to the island.

The images below are a portion of those plans and will give the prospective buyer a greater sense of the amount of time and research that went into this island to determine the feasibility of development.  The biggest constraint for us for our plan of creating a medical retreat, was that for patients that were ill, it would be too difficult to travel to such an exotic but relatively remote location.  Given the logistics of some of the medical therapies, it was determined that although gorgeous, the island would not be well suited for the purposes of a medical and health retreat.